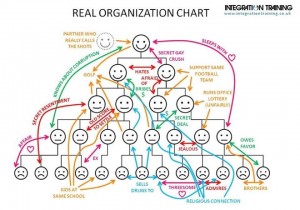 A couple of weeks ago I wrote about how unconscious (and limiting) loyalty in a team can hinder results.

This concept can be expanded – from unconscious to conscious loyalties – from teams to an entire organisation.

In addition to the official org chart, there are several other orders in play, both visible and hidden.

Sales executives, working on complex strategic sales, have been aware of this for a while. When preparing a sales pitch they take time to find out about hidden dynamics in the target organisation.

Yes, whether we like it or not, order is unavoidable. The universe would break down without it.

Even chaos theory talks about it. Out of chaos, order is established, naturally.

Let’s have a closer look at what orders (or rankings) in organisations are really about:

We all know about bosses and bosses’ bosses. From the top down: CEOs, executives, managers, subject matter experts, people who do the footwork…

However, there is much more to the dynamics in an organisation than the naked eye can see. People have relationships with each other.

Some sales people and consultants do a thing called ‘relationship mapping’ at the start of a new project.

Which brings me back to ranking and orders.

Obviously it’s important to find out who-knows-who from outside work, such as family, sports clubs, etc.

Because these connections influence decision making, and other actions.

It’s even worth knowing who are the smokers, because during ‘smokos’ they usually hang out near the back door – and talk.

There are other, less arbitrary, categories:

Ranking time wise: How long has someone been with an organisation or a team?

This needs to be acknowledged. It’s also important for new manager to consider, and it’s often referred to as ‘leading from the last place’.

Ranking of skills: Someone who is new to an organisation, and does not have a management role, can have a high ranking in a certain subject.

Ranking on effort: A higher standing also depends on how much work someone puts in.

Ranking on investment: Someone who has a financial investment will feel more responsible for the success of a company than someone who simply takes a wage.

So there is a rich tapestry of relationships and orders which can be quite confusing when you’re new to an organisation.

Which can create havoc, when out-of-balance or disrespected.

But which can also make an organisation thrive, when acknowledged and rewarded.

This is where Systemic Constellations and Organisational Constellations help. They can reveal  hidden dynamics and show ways to remedy ‘stuck’ situations.

So, if you are in such a situation, as team leader or team member, please get in touch with me to discuss what might be done. You, and your workplace, deserve to be in a happier place.